2004 Tomis CONSTANTA edged Robur Tiboni URBINO 3:2 to remain in contention for a spot in the Challenge Round of the 2013 CEV Volleyball Cup. Tomis mentor Darko Zakoc was not too happy with the result. 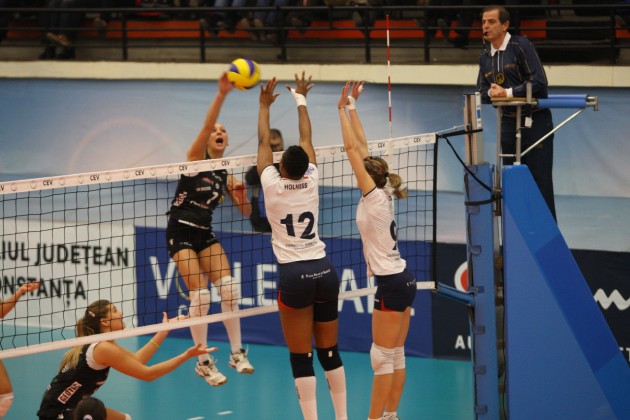 Even though the weather was really cold there on the banks of the Black Sea, the local fans were able to contribute a great atmosphere in the sports hall as they loudly cheered on their heroines for almost two hours of play. The start of the game was very close and after Tomis had moved up 11:6 anchored by the attacks killed by Jeoselyna Rodriguez Santos, Robur Tiboni URBINO fought back to flip the charts around (15:16). The sides played point for point before the home heroines could pocket the final 25-22 with their captain and middle blocker Claudia Gavrilescu standing out in that close final rush.

As their libero Sofia Giombetti was lacking consistency, the Italians quickly trailed 3:8 in set 2 and the home side cruised away to claim a margin of 9 points by the second mandatory stop (16:7). As they seemed not to have any better option, the Italians eventually did not change their libero and quickly lost that section of the game (25-13).

Still URBINO fought its way back in the third set going up 6:3 and 8:6, playing very relaxed and without any pressure; as they cashed that section with the score of 25-18, the fate of the game was somehow re-opened. In set 4 the teams fought fiercely for every single point with the Romanians that were extremely effective from the serving line but URBINO responded with a solid block. The end of the set was quite dramatic, Tomis head coach Darko Zakoc received a yellow card and the guests from Italy could eventually call for the tie-break (22-25). There Tomis started out with the right pace (8:4) and even though URBINO attempted a late comeback, it was still enough to cruise to the final 15-13 and celebrate that 3-2 home win.

Tomis mentor Darko Zakoc was not too happy with the result as his side has lost one point along the way but remained confident about the chances of making it to the Challenge Round of the CEV Cup.