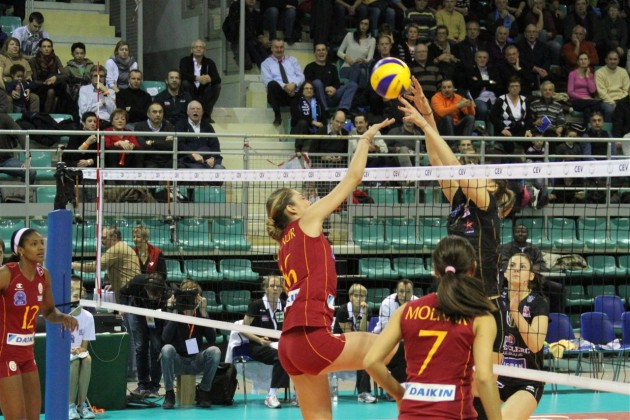 Galatasaray set the pace of the game already by the first technical time-out of the opening set (6:8) with good blocks being killed by Özgenur Yurtdagülen and the guests gradually but confidently widened the gap with the help of their Cuban standout Rosir Calderon (12:16). However, ASPTT MULHOUSE did not surrender that quickly and anchored by their captain Anna Rybaczewski could fight back to -2 (16:18). Even though the score remained relatively tight, the supremacy of the guests was never in danger and they eventually pocketed the first set with the score of 22-25.

ASPTT MULHOUSE caught a good start in the second set (3:1) but Galatasaray did not waste too much time to impose its supremacy, once more via the attacks killed by Calderon (5:8). The local heroines were trailing by 10 points at the second mandatory stop (6:16) and even though a few points were contributed by Tatjana Bokan and Iuliia Ferulik, Galatasaray was in full control and did comfortably sail to the final 13-25.

Via the fighting spirit they are well known for, the home players stay tuned in the early phases of set 3 up to 6 all but gradually Galatasaray started dictating the tempo of the game (13:16, 14:18) with a very good performance in all fundamentals. MULHOUSE fought bravely (17:23) but it was Galatasaray that had again the upper hand in the end (18-25).

“We are disappointed and especially our block did not work properly tonight” says local captain Armelle Faesch. “We were playing a very strong team and we fought as much as we could but this task was too demanding for us” concludes home mentor Magali Magail.