Dinamo MOSCOW finished the League Round in second place thereby pocketing a ticket to the Playoffs 12 with the hosts of Bank BPS Fakro MUSZYNA suffering a major upset in front of their many fans. 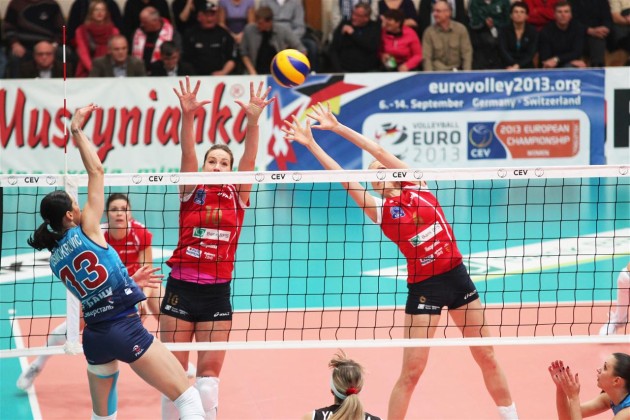 Bank BPS Fakro caught a good start (10:6) and even though Dinamo head coach Svetlana Ilic promptly asked for a time-out, still she could not stop the run of the home side that went up by six points at the second mandatory stop and did not slow down all the way through to seal the first set with the score of 25-21.

The second set was an extremely close affair with MUSZYNA going up 8:5 and 11:6 before their guests from Russia could fight back, drawing the score first at 23 all and after four set balls they eventually cashed the 30-28 that moved the set count to 1:1.

Bank BPS Fakro imposed its rule in set 3 with a series of blocks moving up 8:4 and 16:11; after Dinamo stormed back to -2, MUSZYNA head coach Bogdan Serwinski asked for a time-out and it paid back since his players got back control of the game cruising to the final 25-17 and provisional 2:1.

Dinamo jumped out to a terrific 8:1 lead in set 4 and controlled the operations all the way through to call for the tie-break. There a terrific battle followed with the score remaining close up to 6 all, before Dinamo moved to the front (11:7), a break that MUSZYNA could not compensate for and finally the Muscovites could celebrate a precious and valuable 3:2 win.