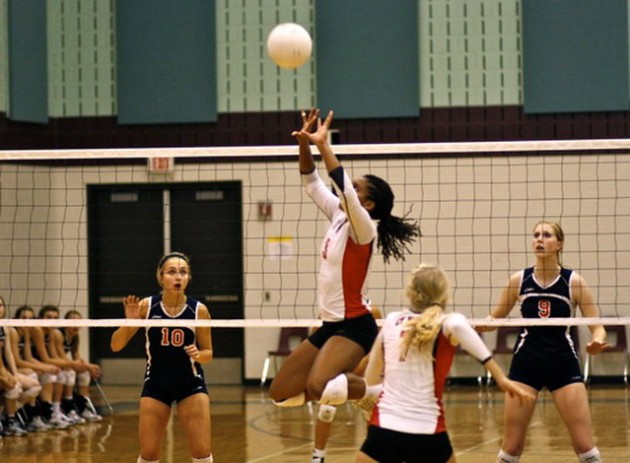 Both Collins and Ogbogu were named to the 2012 Under Armour High School All-America First Team and played in the Under Armour All-America Volleyball Match & Skills Competition in Louisville last December.

“This is a great class for our program and we are thrilled with the quality of the young women we have acquired to represent The University of Texas on and off the court,” Elliott said. “Each one of them has the ability to come in and compete from day one.”

Collins led Cypress Woods to a 40-4 record as she recorded 305 kills, 51 aces, 318 digs, 1,313 assists and 62 blocks during her All-America season. She competed on the United States Girls’ Youth National Team that competed at the 2011 FIVB World Championship in Turkey. She was named to the 2012 Volleyball Magazine/Rox 25 Underclassmen to Watch. She was named District 17-5A most valuable player in her 2011 junior season, leading Cypress Woods to a 41-6 record. She tallied 179 kills, 206 digs, 30 aces and 470 assists for the Wildcats. As a sophomore in 2010, she helped Cypress Woods to a 45-3 record and the Region III championship as the team reached the state 5A semifinals. As a member at the club level with Texas Pride VBC 17 Elite, she helped her team win the Lone Star Classic in 2011 to qualify for Junior Nationals. She also competed on the 2010 U.S. Girls’ Youth National Training Team and took part in the 2008 USA Volleyball High Performance Championship with the USA Select A1 Team coached by current UT assistant coach Erik Sullivan. She was named District 15-5A Newcomer of the Year in her 2009 freshman season and earned Class 5A all-state honors while being chosen to the Prep Volleyball.com Frosh 59 and nominee for Freshman of the Year.

“Chloe joined our program this spring and has been a great addition to this program,” Elliott said. “She is a natural setter with great speed, vertical jump and body control in the air. She may be one of the best pure athletes I have ever coached. Chloe has the ability to help this program in many ways and we are excited about her future.”

Ogbogu was named 2012 Gatorade Texas Volleyball Player of the Year after leading Coppell to back-to-back Texas 5A state championships in 2011 and 2012. In the 2012 title match, she led Coppell with a match-high 24 kills while hitting .365 with six blocks (three solo) in the five-set win over New Braunfels. She posted 10 kills while hitting .450 with five blocks. For her senior season, she recorded 486 kills and 144 blocks while posting a .555 hitting percentage to earn MaxPreps All-America honors. She was named to the 2012 Volleyball Magazine/Rox 25 Underclassmen to Watch and the 2011 AAU All-American team.

“Chiaka will continue the great tradition of middle blockers we have had in this program,” Elliott said. “She is a smooth athlete that touches 10′-7″ and with growth has the potential to develop into one of the premier players in the nation. She has natural lateral speed and will be a great blocker with her explosive jumping ability.”

Lopez was named team captain for the 2013 Puerto Rico Junior National Team that will compete at the FIVB World Championship in the Czech Republic in late June. She joined the Puerto Rico Adult National Team last year at the age of 16 and played in the Pan American Cup in Mexico as the team qualified for the 2013 Grand Prix in Brazil. Last year, she was named as the country’s top volleyball prospect at the 2012 Elite Athletes Awards and was named Elite Volleyball Player of the Year by Banco Popular. At the age of 13, she joined the Puerto Rico Youth National Team in 2009 and helped the team win the bronze medal at the 2010 NORCECA Tournament in Guatemala and was the team co-captain for the team at the 2011 World Volleyball Championship in Turkey. As a member of the Junior National Team, she played in the 2010 NORCECA Tournament in Mexico. In 2010, she played as libero for the U-20 Junior National Team that won the bronze medal at the U-23 Invitational Tournament in Peru. She was a four-time All-Star performer for the Puerto Rico High School Athletic Alliance (PRHSAA) from 2009-12 and led the Notre Dame High Knights to four consecutive league championships. At the club level, she led Vaqueras 16-U to a fifth-place finish at the 2012 AAU Tournament in Orlando and earned All-America honors. In 2009, she led Torrimar to the 2009 Volleyball Festival championship in Arizona and was named the tournament’s most valuable player.

“Pilar is a great addition to this program,” Elliott said. “She is a very smooth player that has the complete game. She has played at a very high level and her experience can help this team in 2013 and beyond.”