First eigth matches from the Division I Championship have been played and results are pretty much expected. 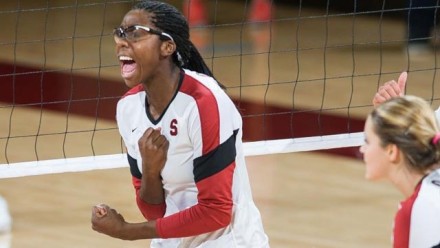 Florida State won its first round match of the NCAA tournament as it defeated Georgia Southern in consecutive sets, (25-19, 25-20, 25-20). The Seminoles moved to 25-7 on the season while playing at the Stephen C. O’Connell Center.

Texas A&M recorded a 3-0 sweep of the UTSA Roadrunners in NCAA Division I championship first-round action at Gregory Gym on Thursday evening. Keyed by sophomore outside hitter Sierra Patrick and redshirt freshman middle blocker Jazzmin Babers, the Aggies won the three sets by scores of 26-24, 25-21, 25-18 to improve to 19-11 on the season. With the win, the Aggies notched their eighth victory in the past nine matches.

Stanford held Hampton to no more than 11 points in any of the three sets to pick up an opening-round sweep on Thursday night. Stanford advances to play Oklahoma in the second round at 10 p.m. Friday. Carly Wopat paced the Cardinal with 11 kills, while Inky Ajanaku added 10 kills.

Cal State Northridge won the first two sets and forced Colorado State into a hole. The Rams regrouped coming out of the locker room, however, winning the next two sets and forcing a fifth set. They held a 7-4 lead in the deciding frame, but a 5-0 CSU-N run put the Matadors on top.The Rams led the Matadors in most categories including hitting (.328 to .248) and blocks (16 to 5). The Rams also had more digs and service aces, looking at the individual sets is what made the different.