Washington earned a trip to the national semifinals by defeating Pac-12 rival Southern California at the Galen Center. 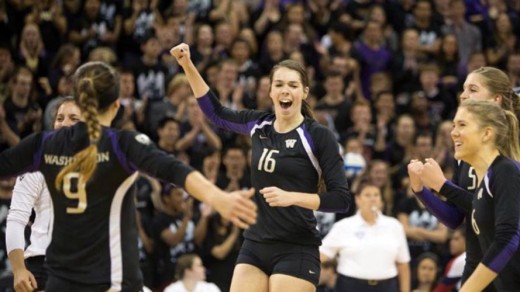 After USC took the first two sets, Washington rebounded to take the second two before the Women of Troy forced a decisive fifth set.

Washington’s Krista Vansant picked up momentum throughout the match, leading all players with 38 kills. She also led the Huskies, hitting.346, earning 30 kills, and garnering 30 digs.

Ebony Nwanebu of Southern California balanced Vansant on the other side of the net, hitting .566 with 30 kills. Natalie Hagglund led the Huskies with 30 digs.

USC was unable to exact revenge after the Huskies handed USC its only home loss of the regular season on Oct. 27.

Top-ranked Texas proved worthy of its No. 1 seed on Saturday, as the Longhorns continued defense of their 2012 national title with a 3-0 sweep of No. 8 Nebraska in the NCAA Lincoln regional final in front of 8,343 fans at the Bob Devaney Sports Centeir.

In the semis will on December 19th will play Texas vs. Wisconsin and Washington vs. Penn State…