The American Volleyball Coaches Association (AVCA) is proud to announce that University of Washington junior outside hitter has been selected as the 2013 AVCA Division I Player of the Year. The award was presented this afternoon at the AVCA All-America/Players of the Year Banquet presented by Northwestern Mutual, which was held in Seattle, Washington as part of the 2013 AVCA Annual Convention. 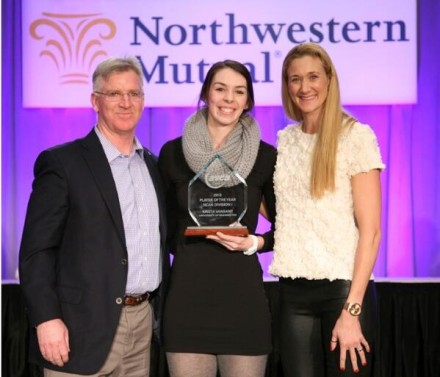 It was another impressive season for Vansant, who this season was named the Pac-12 Player of the Year. The junior led Washington to the Pac-12 title this year and was one of four Huskies named to the All-Pac-12 Team.  Using her powerful right arm, Vansant led her Huskies all of the way to the NCAA Semifinals and a top-10 ranking in the AVCA Coaches Poll through the entirety of the season.  In the quarterfinals against Southern California, the two-time AVCA All-American smashed 38 kills and tallied 30 digs on her way to being named the Los Angeles Region’s Most Outstanding Player.

Jordan Larson – “One of my favorite...