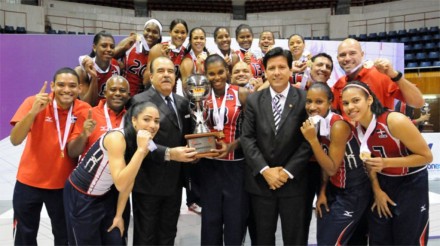 It is the third crown for the Dominicans in the history of the event with the previous two in 2008 and 2010, snapping the two-year reign of the Americans. They also have won six silver and three medal bronzes.

The winners committed only 20 unforced errors compared to 31 made by the defeated side.

Bailey Webster was the top American contributor with 16 points, followed by TeTori Dixon and Cursty Jackson with 11 and 10, respectively.

Marcos Kwiek, coach of Dominican Republic: “I am very happy with this important victory for us. Today the team played with a lot of discipline, served and blocked very well. We studied the opponents and our players perfectly followed the game plan. We came here with the purpose of winning the cup, because we have the tools for it.”

Bethania De la Cruz, captain of Dominican Republic: “I am super happy with this crown. We did our best effort to achieve our goal and we trained and worked hard for it. The United States always has very good teams, and any team shows why they are one of the super powers in the world.”

Jamie Morrison, coach of United States: “The Dominicans played very well but I am proud of the job my players did, especially at the latter part of the match. It was a good performance from my young players who grew up and stayed together as a team. A couple of key plays at the end were executed by the Dominicans and they deserved the victory. My congratulations.”

Carli Lloyd, captain of United States: “The Dominicans came out to fight and it was difficult for us stop them because since the very beginning they were very strong. We tried to reorganize a couple of times and we did it, but they kept battling and playing well. They wanted to win badly. My congratulations.”

To read more about this competition, to see stats, video and photos click on Pan American Cup 2014 W.