Jordan Larson-Burbach is the best female volleyball player in 2014 by the choice of WorldofVolley! 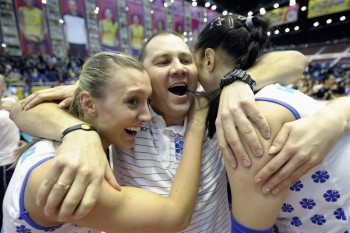 When she came to Europe five years ago, Jordan Larson was an American talent looking for her place in the volleyball world. However there was something about her that was different from the rest of girls. And, her club Dinamo Kazan noticed that.

She was not the best volleyball player back then, but she was a true leader. A pillar for success. And that is why she stayed in Kazan for five years! Over the time Larson was becoming better, she was gaining valuable experience and was collecting trophies in the process. But the 2014 was a peak of her career.

Jordan Larson has won the triple crown with Dinamo Kazan!

In the big final of the CEV Champions League she scored 16 points and helped Russian side to grab first ever European title! The next big match was a battle for the gold at the Club’s World Championship. American player was with double digits again – 14 points and Dinamo became the best club in the world! Only couple of days later a big final of the Russian Championship was scheduled. Dinamo Kazan against Dinamo Moscow, Larson 14 points, title went to Kazan! 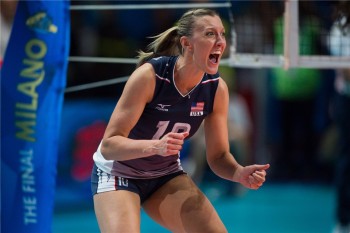 With bag full of medals Jordan Larson returned home to America, ready for the National Team challenges. The Gran Prix 2014 did not go as expected. The final stage slipped from the hands of the USA just for one single point, but it was like that failure has united the team even more. And the next competition was the World Championship in Italy.

With Larson as leader on court, the USA team was doing a great job at the tournament, and eventually reached the semifinal against the main favorite Brazil. Everyone have already seen Brazil as the World Champion, but Jordan Larson made 15 points and led a straight sets win over the reigning champion! In the final match, Larson and her teammates overpowered China and became the World Champions!

After everything she has done in 2014, she decided to move on and start some new advantures. American star left Kazan as a world champion and signed for Eczacibasi. Until now her club has only one defeat in the Turkish Championship…

Congratulations Jordan, your are the best female volleyball player in 2014 by the choice of WorldofVolley.

NEW YEAR’S INTERVIEW: Simón – „I hope to play for Cuba in future but it doesn’t depend on me”

How about Kim of Fenerbahce?

What did Kim win with her national team last year?

USA Volleyball is full of joy and...