Mariusz Wlazly is the best male volleyball player in 2014 by the choice of WorldofVolley. 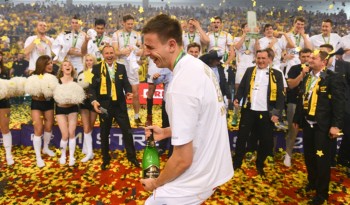 MVP, MVP, MVP… Those three letters became initials of Mariusz Wlazly in the previous year. But, people from Poland do not look at him only as the most valuable player. They see him as a leader, a victor, a legend… A person who brought back the World Championship title after 40 years… But let’s go from the beginning. It has all started with a defeat.

In March 2014, Mariusz Wlazly and his teammates from PGE Skra Belchatow suffered two serious blows. Firstly, Skra was eliminated in the CEV Cup semifinal, and then came even larger shock – elimination in the semifinal of the Polish Cup! Two trophies slipped away from Mariusz hands. But, those are the moments when a true champion is recognized.

It is about are you going to stay down, or rise again and show everyone what you got. What do you think Mariusz Wlazly had done?

It was time for the Playoffs of the Polish Championship. PGE Skra Belchatow swept away Warszawska in the quarterfinals with 3-0 in series, and then did the same to Jastrzebski in the semifinal – again 3-0 in series. In the big finals, Skra was playing a classic against Resovia. It was all over in just three games again. Thanks to him. Wlazly scored 69 points in the final series (26+20+23)! Championship title returned to Belchatow, while he collected the first MVP award of the year. 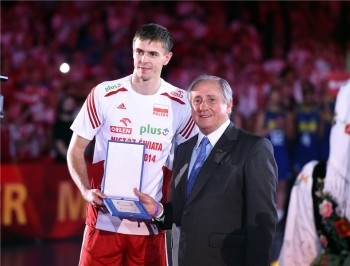 Season for clubs was over, and players were about to join their National Teams… Something Mariusz Wlazly has not done since 2010. He had some misunderstanding with the previous head coach of Poland Andrea Anastasi, but when Stephane Antiga took over the selection things have changed. Two volleyball legends, who had just finished season together in PGE Skra Belchatow agreed easily. Antiga managed to persuade Wlazly to come back to the National Team… It was a historic agreement.

But, it has again started with a defeat. Poland failed to qualify for the final tournament of the World League, however, Wlazly, Winiarski, Kurek and some other key players missed most of the games. They were all preparing for the main event of the year – The World Championship.

Poland was the host and people were secretly hoping that this generation can finally bring them the gold after 40 years of waiting. And, when team qualified for the final, the whole country started shaking. The big game was finished by a spike of Mariusz Wlazly. Poland defeated Brazil and became the World Champion, while hero of our story collected another MVP award.

Mariusz Wlazly, you the best male volleyball player in 2014 by the choice of WorldofVolley.

NEW YEAR’S INTERVIEW: Russell Holmes – “I would rather be respected than liked”