Jordan Larson is the best female volleyball player in 2015 by WorldofVolley's choice! 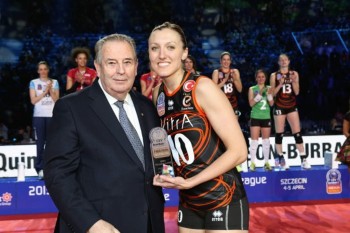 For the second year in row! Jordan Larson has become synonym for the word – Best! A year ago we chose Jordan Larson for the best female player in 2014. Back then she had a bag full of medals, triple crown with Dinamo Kazan, the gold medal from the World Championship… And she had a new club! American volleyball star moved to Turkey to start a new adventure with Eczacibasi Vitra.

She did not need much time to bring luck to her new team. Eczacibasi Vitra have won their first ever Champions League crown, while you can already guess the MVP of the tournament… Of course, Jordan Larson. She has therefore won the Champions League trophy back to back as she was at the top of Europe a year ago with Dinamo Kazan.

One month later Eczacibasi Vitra participated at the Club’s World Championship and clinched another major trophy. The MVP – Jordan Larson!

Finally, American player completed a fantastic season with a gold medal with the USA national team. She helped her country win the Grand Prix 2015.

One big BRAVO for the MVP girl – Jordan Larson.