Sport-Specificity. When designing conditioning for volleyball, consider one of the most basic training concepts, specificity. Specificity is a method of training in a specific way to create a specific outcome. 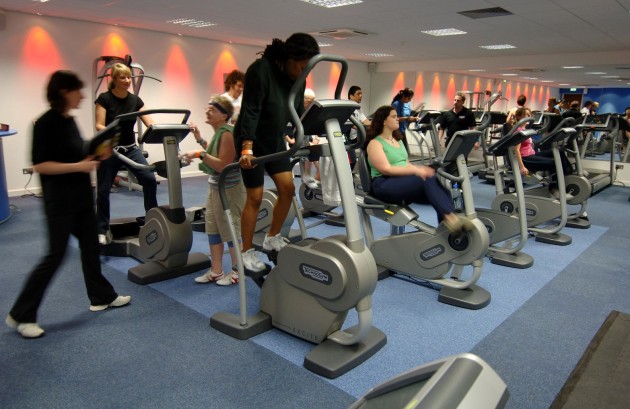 There are many important aspects of conditioning – strength, speed, power, etc. However, the degree of importance relies completely on the specificity of the sport.

Middle blocker. For example, a middle blocker in volleyball must develop a stable ready position optimal for transitioning quickly laterally at the net then have the core stability to transition into a vertical jump and perform a block under control.

Libero. When playing defense, a libero must be able to move in any direction on the court quickly and get in ready position to make a play on a ball.

While conditioning for volleyball for these two types of players may be very similar, it may be appropriate for a middle blocker to focus more on single leg strength, agility, and vertical power while a libero focuses more on short sprints emphasizing deceleration, balance, and coordination. 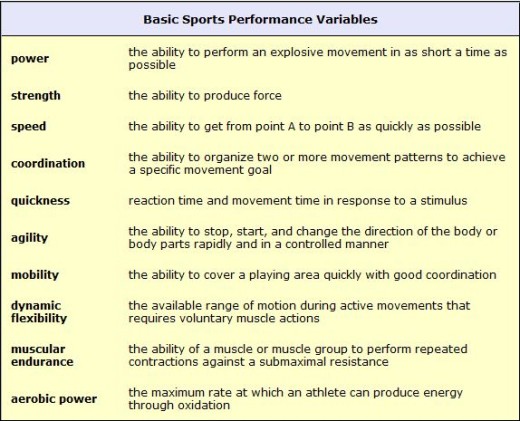 Strength. Strength is the ability to produce maximal force. Superior performance levels cannot be achieved without the development of strength. Developing strength by weight training for volleyball is an important component of conditioning for volleyball. Strength comes in many forms and is more complex than the basic idea of developing force tension within a muscle.

Maximal Strength refers to the maximum amount of weight that an individual can lift at any one time.

Static Strength is the ability to hold or stabilize a position. This strength is vital to developing power in movement.

Concentric Strength is the ability of a muscle to develop force while shortening.

Eccentric Strength is the ability of a muscle to develop force while it is lengthening. Eccentric strength is essential for the development of explosive power.

Power. Power may be the most important factor in sports performance. For most sports, maximal strength is always a training goal but speed of movement is crucial as well.

When attempting to become an explosive athlete, it is important to consider the total spectrum of athletic development. Strength alone will not accomplish the ability to become explosive.

Olympic style weightlifting, complex training, and plyometrics are common methods of conditioning for volleyball. training for volleyball is this way has the advantage of being movement and speed specific for developing explosive power.

Speed. Speed in forward, backward, and lateral positions is important in many sports. Speed refers to the point at which athletes can accelerate no more and have reached their maximum rate of movement.

In most sports, what is referred to as speed is really acceleration because athletes rarely reach maximum speed during competition.

Being able to move from point A to point B quickly allows athletes to set up in proper position or merely gives them an advantage over their competition.

When conditioning for volleyball, players should focus on developing speed-strength because most plays involve moving a short distance quickly.

With stops and starts, speed merges into the concept of agility.

Agility. Coaches and players often look at coordination and agility as the key components that determine whether someone is athletic.

From the way she moves her arms all the way down to the way her feet interact with the ground, an athlete needs to develop the most efficient way to move.

Conditioning for volleyball should involve stopping, starting, landing, and change of direction movement skills. These are all important skills to being successful in volleyball.

Flexibility. The ability to move the joints in the needed range of motion is vital to sports performance. Maximal flexibility isn’t necessary for most sports.

Quality of movement is affected by flexibility. When athletes have command of their flexibility, they are able to perform more strongly, quickly, and efficiently.

Strength, speed, and endurance are qualities of every sport. Flexibility determines how proficiently and efficiently the athlete can apply them.

Muscular Endurance. The ability to perform repetitive bouts of exercise under stressful metabolic conditions is important to many sports.

If you have muscular endurance training in your program, it may be best placed near the beginning of off-season conditioning.

Aerobic Capacity. Developing a minimal level of cardiovascular fitness may be required for all sports. In aerobic sports the athlete relies heavily on her aerobic capacity.

Good aerobic capability will have a positive effect on recovery, even during high-intensity sports competition.

However, aerobic power is probably the least important factor to volleyball performance.

Since excessive aerobic training may lessen strength and power gains, ESD training may be the best method to improve aerobic power when conditioning for volleyball.

Speed Endurance. Athletes with poor speed endurance are unable to accelerate and sprint at the same high level repeatedly during competition because of fatigue.

An athlete can gain several advantages in their sport by developing adequate speed endurance.

The ability to make repeated short sprints at the same speed with minimum rest.

The ability to hold maximum speed for a longer distance before slowing down.

Power Endurance. Sports such as swimming, and wrestling, and player positions such as running back or pitcher, require a high level of power endurance, power applied several times repetitively.

A conditioning for volleyball program must physically prepare players for many repetitive jumps, starts and stops, dives, rolls, and overhead motions that occur during matches.

Start Strength is the ability to exert maximal forces right away.

Explosive Strength refers to how quickly an athlete develops force.

Periodization. Specificity also relates to the athlete’s sport season. Conditioning for volleyball should gradually progress in cycles from generalized to sport specific.

Read more news from our Stretching section, every Sunday a new story! Tomorrow read about Good Stretches for Volleyball Practice.