Friedrichshafen, Germany, January 17, 2012. Top match in Pool B of the 2012 CEV Volleyball Champions League and the interest is huge: as German champion VfB FRIEDRICHSHAFEN and Russian champion Zenit KAZAN cross their arms on Wednesday night, the match will be distributed as “Match of the week” all over the world. 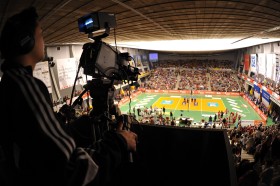 VfB FRIEDRICHSHAFEN proud to host Match of the week

The match will be shown in more than 25 countries.

In Germany the fans far away from the Lake of Constance can watch it live via TV on SPORT1+ or via Internet on LAOLA1.tv and highlights in SWR TV and Regio TV.

“We took this game as match of the week because it is the most attractive of the sixth leg”, says Christian Högg from the Sportsman Media Group which distributes the TV rights of the Champions League on behalf of the CEV.

Not only the interest from TV is there – also the request from the fans is huge.

The VIP Lounge is sold out since days.

“In the past our supporters took us to successes again and again”, says Jürgen Hauke, CEO of VfB FRIEDRICHSHAFEN.

“I hope that they can be part of a surprise on Wednesday again. It will be a great Volleyball party – that is sure”.

CEV CL: Eczacibasi resists to German storm to finish second in Pool A