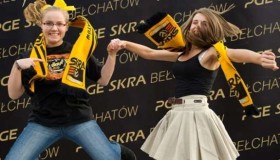 PGE Skra started without Daniel Plinski and Michal Winiarski who are usually included in the starting six but this time got the chance to take a rest in the middle of the season.

These substitutions did not influence the game of the home team which dominated from the beginning right up to the end.

The head coach of Budvanska Rivijera Veselin Vuković asked for a first time-out as the score stood at 12:7 for the hosts.

PGE Skra played well in blocking and Aleksandar Atanasijević did everything to prove that he is a great substitute for team captain Mariusz Wlazly who started the game from the bench.

He joined the game as the score had moved up to 21:13 and head coach Jacek Nawrocki decided to go for a double substitution.

The captain of PGE Skra was the man who closed the opening set with an ace.

Wytze Kooistra was the best player of the first set with perfect stats, which included 100% of killed attacks (4/4) and 3 blocks.

The second set only confirmed the domination of the hosting team.

PGE Skra went up 14:3 when Veselin Vuković took his first time-out in this section of the game.

Only Ivan Raic, who clipped 11 points and was the best scorer of Budvanska Rivijera, tried to compete with the local heroes, but it was not enough as the scenario did not change at all also in set 3.

Both the captain of Budvanska Rivijera and the coach were sorry for their poor performance in front of such an amazing audience.

“We were simply not able to withstand PGE Skra that gave us no chances at all. We wanted to give a good show to the audience, but we just did not manage to do it. We may only apologize for this with these great spectators as we could not compete with the home team” states Vuković.

“We wanted to do our best but PGE Skra left us no hope. There is nothing to comment, everybody saw the way the match looked like. It is enough to look at the score” said Budvanska Rivijera team captain Milan Marković.

Serbian opposite Aleksandar Atanasijević was the best scorer of the game with 16 points (killing 15 out of 27 attacks).

Wytze Kooistra made a great impact, scoring 12, including 4 blocks and 2 aces.

“I am happy with my performance and with the way the team played. We just tried to enjoy the game” the Dutch middle-blocker said.

“I am proud of my team. The players showed great motivation, they did not let the opponent stay in contact. We played extremely well in defense and there was no moment of relaxation. Everybody kept fighting and digging for each ball and this makes me happy” PGE Skra coach Jacek Nawrocki stated.