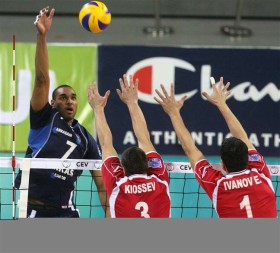 John Gordon Perrin from the visitors was the best scorer in the match with 16 points while for the home side Jason Haldane and Ivaylo Stefanov ended up with 12 points apiece.

Both teams started well and gave real entertainment to the more than 3’000 spectators in attendance at “Arena Armeets”.

The score stood at 10:10 as Arkas made the difference thanks to some good spikes by Liberman Agamez and the second technical time-out came at 16:12 for the guys from Turkey.

This comfortable lead gave confidence to the visitors and they ultimately took the first set with the score of 25-17.

In the second set CSKA had the lead at 10:8 but Arkas managed to take four straight points thanks to very strong services by Burutay Subasi.

The wing-spiker had joined the game at the beginning of the second set after substituting Brazilian star Joao Paulo Pereira Bravo.

CSKA SOFIA was again in front at 18:17 but two successful attacks – one by Subasi and one by Agamez – made it 19:18 for the visitors.

Two aces by Subasi contributed an even more comfortable lead for Arkas at 22:19. Perrin had the last word in the set with a spike for the final 25-23.

In the mid of the third set Arkas had a massive five-point advantage at 14:9 which gave them the necessary confidence to go for a win in three sets.

Before the end Subasi managed to score his third ace in the match.

“We played well but our opponent today was a very experienced team full of great players. I think Arkas could be even one of the favorites in the tournament”, concludes the head coach of CSKA, Aleksandar Popov.