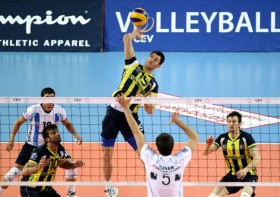 Fenerbahce dominated the scene in the opening set (8:5, 16:11) with Ivan Miljkovic scoring 7 points all alone and compensating for the absence of Cuban-born star Leonel Marshall.

The story did not change also in set 2 (8:6, 16:10 for the hosts) but Hypo Tirol fought back bravely to draw level at 23 all before Fenerbahce scored the next two rallies to go for the provisional 2:0.

The score stayed close up to 12 all in set 3 but afterwards Fenerbahce changed gear (16:13) and did not look back again to finish it off with a comfortable 25-15.

“This game was very important to continue our adventure in the European Cups” says home head coach Daniel Castellani.

“If we play like we did tonight we have good chances to make it to the last stages of the CEV Cup”.

“We were plagued by many injuries since the start of the League Round but we still can continue our adventure in the CEV Cup, hoping to make it to the final there” adds team captain Arslan Eksi.

“We made a lot of errors in reception, attack and service today. Fenerbahce played better than we did and they deserved to win” singles out Hypo Tirol mentor Stefan Chrtiansky.