Baia Mare, Romania, January 18, 2012. Remat ZALAU scored tonight its first win in prelim Pool B of the 2012 CEV Volleyball Champions League as in front of a delighted crowd the Romanian team claimed a superb straight victory (having an unexpected margin of 5 points in all sets, with a triple 25-20) over the Belgian team of Euphony ASSE-LENNIK. 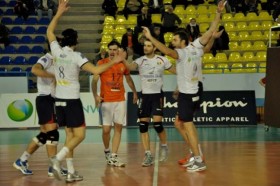 ZALAU conquered one of the most ambitious goals of the year in what would be called a well deserved reward after a spectacular game.

The Belgian team started very confident but it turned out to be Remat’s night.

After losing some vital points from service mistakes in the first set, Remat came rapidly in the battle with some powerful attacks scored by Peter Nagy.

Later, it was Razvan Mihalcea who saved a few tricky balls for Remat with some nice blocks having a decisive intervention in the course of the set.

The fans enjoyed long rallies and some fabulous points done both by the hosts and by the visiting team.

The third set came as a confirmation of Remat’s dominance, even though the beginning was quite balanced, Euphony leading before the first technical time-out.

However, the Romanian team snatched the set, securing the lead after the second mandatory stop (16:13) and keeping the Belgians far away in the score (19:13, 22:16).

Marko Klok, the head coach of Euphony ASSE-LENNIK was very disappointed with the result, saying that “We hoped to win this match, but Remat is a good team, which played well all time”.

The captain of the Belgian team, Dejan Radic, confirmed the fact that he and his team mates had come to Romania to win, explaining that they expected this after meeting Remat in Belgium, when they won 3-2.

Mariusz Sordyl, the Polish head coach of Remat ZALAU, stated: “I am very happy for this victory. We played very well, taking into consideration the fact that we have had little time to prepare since we made changes in the team. It is the first Champions League victory for the club; despite the fact that it might be a small step, it is an important one”.

The captain of Remat, Zoltan Mozer, added: “We played as a united team. We had very good blocks, attacks and receptions, which I believe brought us this breath-taking win. We want to thank our amazing fans for their strong support”.