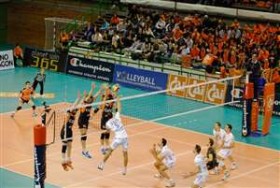 The Italians needed to take at least one point from this game to finish first in the group and therefore they were not ready to leave any chance to the home guys.

TRENTINO set immediately the tone of the game with many blocks and clipping a margin of 4 by the second technical time-out; afterwards they controlled the game and went for the final 22-25.

The scenario did not change in set 2 (3:8) and even though the home crowd supported the players of CAI TERUEL, still TRENTINO looked like a real machine that did not slow down the pace until the final 16-25.

The Spaniards committed many mistakes in set 3 and hence could not question the final fate of the game.

They briefly leveled the score after the first technical time-out but finally surrendered for the clear 0:3 (20-25).

Jan Stokr top scored for the triple World and European champions with 19 points while Fran Rodriguez scored 10 times for the hosts who say farewell to their European adventure for this year.