CEV CL: Bank BPS Fakro is not afraid of DOL

Muszyna, Poland, January 19, 2012. After completing their adventure in the League Round, the players of Bank BPS Fakro MUSZYNA can barely wait for the results of the Drawing of Lots coming up this afternoon in Luxembourg. 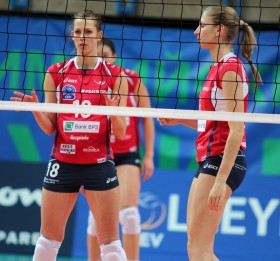 Bank BPS Fakro is not afraid of DOL

“It is a pity that we did not finish first or second in our group” says head coach Bogdan Serwinski, “especially after we took four matches including a couple of tough games in Moscow and Pesaro. We will have to re-start getting probably a very strong opponent already for the 1/8 finals”.

Last year Bank BPS Fakro was eliminated in the Playoffs 6 by Rabita BAKU and the girls from Poland may cross their ways once again with the club world champions from Azerbaijan.

“Personally I see no difference as all top teams are at the same level, so it does not matter if we finally get to play Dinamo KAZAN, Vakifbank TTelekom or Rabita” says captain Joanna Kaczor.

“We shall forget our previous matches and concentrate on what is next. We still have a long season and many competitions, but my hope is that regardless of the draw we get we can advance to the next round also in the Champions League” she adds.

Azerbaijan: Parkhomenko out for the remainder of the season