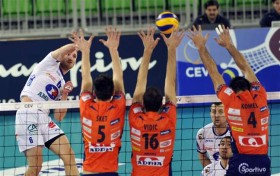 The first set was marked by ACH Volley’s lack of focus.

The home team was up only at 4:2 but then the French side rebounded and at the first technical time-out the difference was already 5:8.

Home coach Igor Kolaković called a time-out (6:11 and 9:19) but as this did not help much he called in three young players – Čebulj, Ropret and Klobučar.

Unfortunately the difference in the score could not be reduced and TOURS VB claimed the first set.

In the second set ACH Volley’s players displayed far more focus in defense as well as in offence, taking the lead from the start.

They gained a two-point lead at 11:9 but the team from France caught up at 17 all.

Nevertheless, the home team managed to keep its focus for a tie in sets.

In set 3 the guests took the initiative but ACH Volley did not allow them to escape until point 14.

This time the time-out helped and at 20:19 the home team took the lead for the first time.

TOURS VB managed to turn the result around and with a excellent blocks and some help from ACH Volley’s players the guests won their second set.

The guests continued in their grand style, quickly taking the lead in set 4.

ACH Volley’s coach Kolaković replaced Šket with Čebulj, who brought the team from Ljubljana to the provisional 9:10.

TOURS VB answered back for a four-point advantage, which was what the guests needed to finish the League Round with a win and the first place in the standings of the group.

After the match ACH Volley’s coach Igor Kolaković said: “TOURS VB has proved to be the better team. We had our chances but did not take advantage of the opportunity”.

The coach of the winning team from France, Mauricio Paes, was of the opinion that his team’s strongest weapons were its serves, which eventually made the difference tonight.

The best scorer was David Konecny (TOURS VB) with 24 points while ACH Volley’s best player was once again Alen Šket with 21.

CEV CL: Bank BPS Fakro is not afraid of DOL