Friedrichshafen, Germany, January 18, 2012. VfB FRIEDRICHSHAFEN won the match, but Zenit KAZAN saved the top position of the standings: for the last leg of the prelims in the 2012 CEV Volleyball Champions League the champions from Germany and Russia delivered a memorable battle, which was claimed by FRIEDRICHSHAFEN with a 3:2 (18-25, 25-18, 25-20, 21-25, 15-7). In spite of it KAZAN is advancing to the Playoffs 12 as the first-ranked team of Pool B. 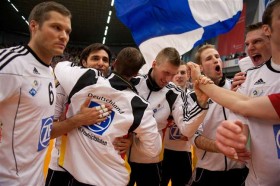 During the 113 minutes of the match both teams presented a fight with advantages for KAZAN in the first and fourth set, for FRIEDRICHSHAFEN in the second, third and fifth set.

After leading 2:1 in sets the Germans had the huge chance to overcome their opponents.

In the fourth part of the match they lead 21:19 and were supported by standing ovations from the fans.

But KAZAN came back, won the set and booked the Playoffs spot as one of the six first-ranked teams.

“We needed only one point. That we got”, says KAZAN coach Vladimir Alekno.

“It is not the first time that I was here and it was always difficult. VfB FRIEDRICHSHAFEN is strong at home and you have to get used to the special light in this gym”.

In spite of missing the top of the charts FRIEDRICHSHAFEN coach Stelian Moculescu was satisfied with the performance of his team.

“My players did it well. My compliments”, he says.

“They harmonized and played well. All in all we can be satisfied. Before the match we did not think that we could have the chance to win it”.

Also Marcus Böhme did not stop smiling after the match.

He served 6 of the 11 aces of his team and was once again one of the most impressive players.

“We can be proud of that success. Against KAZAN you do not win every day”, he says.

“I am very happy about this victory”.

For the drawing of lots coming up for the next round he does not have any preference.

“Before the match we did not think about what happens with which result. We just jumped into the match and played”, so Böhme.

“The drawing, we cannot influence it in any way. So we just wait for the results”.