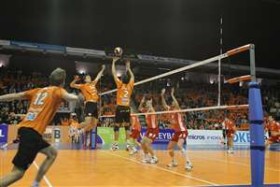 BERLIN had a very good start in the game, pushed by a great and emotional audience that helped develop a thrilling fight against the strong Italians.

Headed by opposite Paul Carroll with six points the hosts managed to keep their little margin almost consistently (8:5 and 16:15) and could win the first set 25-23.

In the second set the Italians got to prove their high skills.

Especially Facundo Conte showed his A-game, being the match’s top-scorer with 23 points.

Some uncertainty on the German side of the net caused by misunderstandings within the team and a highly confident appearance of the guests contributed a comfortable advantage for the Italians and a deserved 25-13.

During the third and fourth set the home guys recaptured their fighting spirit.

The team impressed through strong serves, powerful attacks and an enormous delight in playing. But MONZA showed an excellent game as well, so that neither team could run away in the score.

4’375 spectators got to see a neck-to-neck race at the highest level.

In the end of both sets it was MONZA to score the essential points thereby ending the game with a 3:1.

BERLIN MVP Tomas Kmet was disappointed about the elimination from the European Cups, but he took his hat off to MONZA though: “Most of the time we fought hard and showed a good game against the strong Italians but in the end it just wasn’t enough. MONZA played tactically clever especially through great defense and blocking, which made it hard for us to score. In my opinion it was the better team which won tonight”.

Italian coach Emanuele Zanini was happy about the success of his team: “BERLIN played very good tonight. They surprised us in the first set, when they started very fast and strong. I’m satisfied with the reaction of my team. With character and quality they did everything to obtain the victory. All in all, with these two matches, we deserve to advance to the next round”.