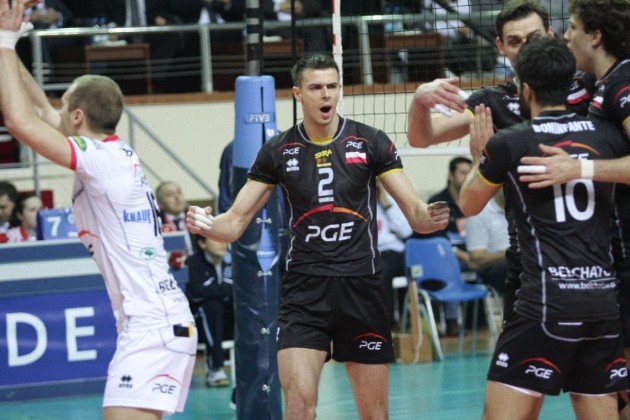 “We desperately want to avoid the defeat and the golden set thriller. The win in Turkey was absolutely crucial for us and very vital after a series of 5 defeats on home soil” states PGE Skra President Konrad Piechocki. “I remember the season 2001/2002 when we lost 5 matches in a row, but in the last seasons we suffered only 3-4 defeats each year. This season is really difficult but I believe in a happy end of this story.“

PGE Skra BELCHATOW – that boasts seven consecutive titles in the national league and last year lost the Championship series to Asseco Resovia RZESZOW – has already suffered eight defeats out of 16 matches and was eliminated from the Polish Cup. However, the armada mentored by Jacek Nawrocki has not lost a single match in the 2013 CEV Volleyball Champions League. “We have a lot of problems with injuries, with the change of our system of playing. One must not forget we lost Bartosz Kurek in the summer and moved Mariusz Wlazly to play as wing-spiker. Our character is something which helps us claim matches of the CEV Volleyball Champions League” stresses Jacek Nawrocki. The PGE Skra coach still has problems with injuries. Serbian opposite Aleksandar Atanasijevic and libero Pawel Zatorski were unable to compete in Saturday’s match vs. AZS CZESTOCHOWA that PGE Skra eventually lost 2:3. “Arkas is a very well organized and strong team. I am pretty sure they believe in their power and possibility of advancing to the Playoffs 6. We have to be very focused on the match and concentrated until the end” added Nawrocki.

The Turkish players arrived in Lodz on Monday evening. They were lucky to find Fryderyk Chopin Airport in Warsaw open, as it was snowing a lot in Poland the last few days. Now everything is in their hands. “We are not going to give up. PGE Skra is a very good team, with perfect defense and great power from the wings. We have to play our best to prolong the match to the golden set. It is going to be very difficult, however I believe we can do it” states Glenn Hoag. For the Canadian coach it will be his third appearance at Atlas Arena in Lodz. As coach of ACH Volley BLED and Arkas IZMIR he competed there in the 2010 and 2012 Champions League semi-finals and lost both matches. Now he hopes for a better result.

ITA W: Cuello – Save the dignity of this sport