Zenit KAZAN downed their compatriots of Dinamo MOSCOW in straight sets to claim the first round of the Playoffs 6. However, they still need to score an away win next week in Moscow in order to play Lokomotiv NOVOSIBIRSK in the much anticipated Russian derby coming up in the semis. 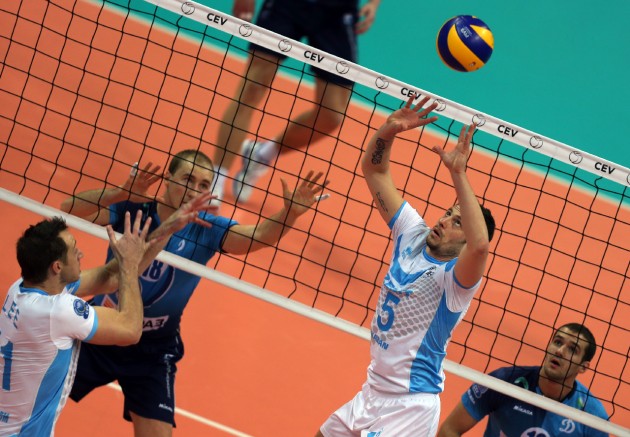 Zenit KAZAN broke away right after the first technical time-out of the opening set with their star Maxim Mikhaylov hitting a series of terrific spikes and serves. On the other side of the net, the real hero in Dinamo’s victory over the four-time club world champions of TRENTINO Diatec, i.e. Pavel Kruglov, was regularly blocked by the Tatars and could not finalize most of his attacks. By the score of 12:7 for the hosts, Dinamo head coach Yuri Cherednik went for some substitutions but it did not change the course of the game as US-American middle blocker David Lee paced Zenit offense and the opening set was cashed quite comfortably with the score of 25-19.

After a very difficult start for the guests from Russia’s capital city, the fate of the second set looked pre-determined quite early; Alexander Abrosimov did shake Dinamo backline with his great serving (7:2) and after that Zenit regularly blocked their opponents to wrap it up at 25-22.

Things did not change much in the third set where the players of Zenit KAZAN looked determined to pocket a straight-set win. They eventually did so as they were paced – once more – by Mikhailov and while the Muscovites looked physically exhausted – they had come to Kazan at 4 am – the hosts could comfortably cruise to a well-deserved 3:0 (25-18).