Halkbank ANKARA completed a memorable day for Turkey’s Volleyball family by emulating their compatriots of Maliye Milli Piyango and seizing the night at “Baskent” sports hall in the first round of semifinal action in the 2013 CEV Volleyball Cup. Halkbank edged Lokomotiv KHARKIV of Ukraine in straight sets. 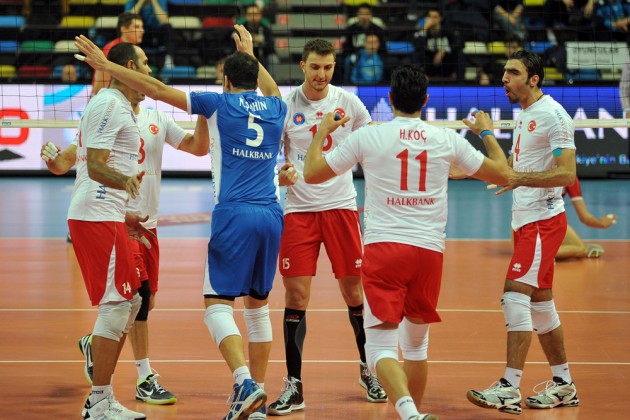 The start of the game was very close and right after the first technical time-out, Lokomotiv showed good tempo to move to the front (12:15) to force Halkbank head coach Veselin Vukovic into a time-out. The home guys woke up and eventually drew level at 15 before Luis Diaz and 2008 Olympic champion Reid Priddy accelerated the pace and paved the way for the final 25-19.

Halkbank got off to a flying start in the second set while Lokomotiv KHARKIV was sidelined by the ankle injury that Ian Iereshchenko suffered after the first technical time-out. As they were well marshaled by their setter Hüseyin Koc, the home spikers showed great quality and consistency (16:12) and did keep control of the operations up to the end (25-21).

After a good start by their opponents (6:3), Lokomotiv head coach Yuriy Filippov stopped the game but could not prevent the home side from widening the gap that stood at 8 points by the time the second technical time-out was called. Lokomotiv KHARKIV could not find a way to stop the march of Halkbank and it was Halil Ibrahim Yücel who finished it off at 25-17 for a deserved 3:0 win.