Lube Banca Marche MACERATA has turned into a very tough opponent for Bre Banca Lannutti CUNEO on the way to the final four of the 2013 CEV Volleyball Champions League. “After our next match in the national league coming up on Sunday, we’ll be focusing exclusively on the return game with MACERATA” says wing-spiker Dore Della Lunga. 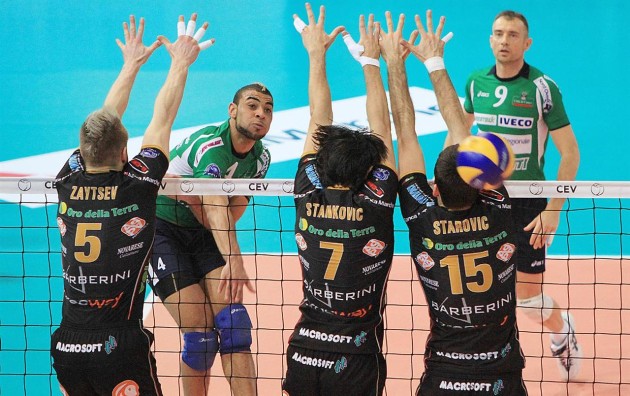 This past Wednesday it took only 74 minutes to MACERATA to cruise to a straight-set win and hence Bre Banca Lannutti CUNEO will have to claim the return match first and also the eventual golden set to find their way to Omsk.

“After our next match in the national league coming up on Sunday, we’ll be focusing exclusively on the return game with MACERATA” says wing-spiker Dore Della Lunga. “We still have the opportunity to reverse the result of the first match and we really want to get to the golden set for a make-or-break situation”.

“We claimed the first round on Wednesday but our qualification for the final four is not yet guaranteed” stresses MACERATA head coach Alberto Giuliani, who was previously at the helm of Bre Banca Lannutti CUNEO for a couple of seasons (2009-2011). “We do expect a tough game in Cuneo and we have to improve on some small details if we want to win there as well”.

This Italian derby is very special not only for Giuliani, but also for Simone Parodi who – before moving to Macerata – had played in Cuneo for a total of four seasons (2005/2006, 2007/2008 and then from 2009 through 2011). The libero of Lube Banca Marche MACERATA, France’s Hubert Henno, is also a former player of Bre Banca Lannutti while the current team captain of the guys from the Piedmont region, Belgian-born Wout Wijsmans, spent two years in Macerata (2001-2003).