Rebecchi Nordmeccanica PIACENZA turned into the first side claiming a ticket to the semis of the 2013 CEV Volleyball Challenge Cup – Women as the group mentored by Davide Mazzanti edged France’s Rocheville LE CANNET 3:2. Read the latest news from volleyball world on worldofvolley.com. 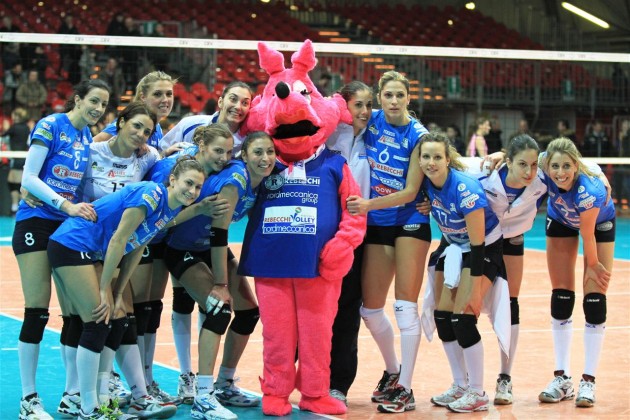 The match was accompanied by the loud home fans – known as “Pink Wolfs” – and a group of French supporters who had found their way to Piacenza by challenging the demanding weather conditions they found along their way to Italy.

“Though we had won last week in France, we knew this was going to be a difficult game” home heroine Lucia Bosetti says. “Rocheville LE CANNET serves really well and tonight they used that strength to shake our backline” she continues.

“Tonight we did go through some major risks and we were even close to lose the game, so this shows that we do need to remain focused from the start up to the end of our matches” Dutch spiker Floortje Meijners (top scorer in the end with 31 points) stresses. “We know the quality of our group but we have to keep composure and not let it go”.

Curiously the head coach of Rocheville LE CANNET, Riccardo Marchesi, was coming back home as last year he had mentored Rebecchi Nordmeccanica. He was awarded right upon the end of the game to pay tribute to the great results he had contributed to this past year. “We played a great match tonight” he says, “and though we have a young but talented team, we were able to play at eye level with PIACENZA, playing for the win up to the very end”.

With Meijners top scoring with 31 points, three more home players finished in double digits, namely evergreen Carmen Turlea and Manuela Leggeri with 17 and 11 respectively, plus Lucia Bosetti with 10. Rocheville LE CANNET was paced by Serbia’s Sanja Bursac with 23 with Maeva Orle registering 15 and the duo composed of Elisabeth Fedele and Milagros Collar also breaking the 10-point mark with 13 apiece.

After the score had remained very close for most of the first set, PIACENZA got to the front right before the final rush leading by three (23:20) and finishing it off at 25-21.

Rocheville LE CANNET got off to a flying start in the second going up 7:3 and 11:6; home mentor Davide Mazzanti changed setter with Francesca Ferretti replacing Danica Radenkovic but all in vain as Rocheville widened the gap (13:6) and enjoyed an impressive lead by the second technical time-out (16:8). Manuela Secolo and Isabella Zilio joined the game for PIACENZA at that stage and though the hosts could close the gap (20:18), LE CANNET could accelerate the pace down the final stretch (25-20).

Things changed quite dramatically in the third set with PIACENZA rushing out to a terrific 14:4 lead to keep control of the operations all the way through (20:9) and wrap it up at 25-13.

PIACENZA started out strong also in set 4 (8:5) but Rocheville fought their way back by scoring four consecutive rallies. By the second technical time-out the guests from the French Riviera had moved up by two points and home coach Mazzanti was forced to stop the game as his side was trailing 14:18. It did not help much as Rocheville broke away (22:16) but PIACENZA showed great determination to fight back to -1 (23:22). Rocheville then missed out on a couple of set balls before cashing their third opportunity to call for the tie-break (26-24).

It looked like a golden set was going to be played to determine the side advancing to the next round as Rocheville opened the tie-break with a splendid 9:5 run but PIACENZA could get back on track on excellent serving provided by Meijners (she registered 9 aces in the end). The hosts got to the front at 12:10, but Rocheville clawed back to 12 all, before a tip by Meijners claimed the next rally for the home side. Only a few moments later the match came to an end (15-13) with the hosts celebrating their qualification for the semis.