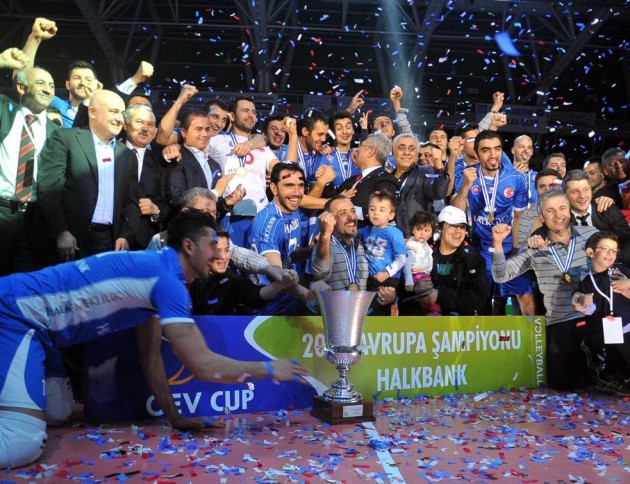 What eventually turned into a memorable night for Turkey’s Volleyball family had started out with a great show joined by local singer Gülsen and a music band to set the tone and contribute the right ambiance for this much anticipated game.

The teams played with great quality right from the start, with Halkbank offense paced by USA Reid Priddy while LATINA responded with good blocking by Pieter Verhees. Andreoli moved to the front and Halkbank head coach Veselin Vukovic stopped the game as his guys were trailing 12:15. Even though the home guys played with glowing hearts, they could not close the gap and the guests from Italy could seal the final 21-25 via a block by Verhees on Venezuelan Luis Augusto Diaz.

Halkbank got off to a flying start in the second set (5:2) forcing Andreoli head coach Silvano Prandi into an early time-out. LATINA fought their way back and had flipped the tables around by the first technical time-out (7:8); however, Halkbank found good pace to move to the front (16:14) and get a small edge (23:21) right before the final rush. Still LATINA could claw back and draw level at 23 all before Halkbank finished it off with an ace scored by Resul Tekeli (26-24).

Halkbank showed great momentum also in set 3 controlling the game all the way through (8:4, 16:9) and though Silvano Prandi had asked for a couple of time-outs quite early in the set, he could not prevent the hosts from marching to the final 25-17 and provisional 2:1.

Andreoli LATINA wasn’t ready to surrender and responded well by imposing their pace in the fourth set enjoying a margin of four by the first as well as the second technical time-out. Halkbank tried to close the gap but anchored by their opposite Jakub Jarosz, LATINA wrapped it up at 22-25 to call for the tie-break and remain in contention for a possible golden set.

Halkbank caught a flying start there (4:1) and could keep a reassuring margin (8:5) by the time the teams changed sides of the court. Prandi called for his second time-out as Halkbank was leading the way at 12:8 but the hosts never looked back with Resul Tekeli finishing the game with a block and an attack from the back row (15-11).

Egyptian Ahmed Abdelhay top scored in the end for the winning side with 22 points while Belgian middle blocker Pieter Verhees paced Andreoli LATINA with 17.

The Italians – who had debuted this year in the European Cups – received their silver medals by CEV Supervisor and ECC Secretary Natalia Kostulska while the trophy and medals for the winning side were presented by Turkey’s Minister of Sports, Suat Kilic, the President of the Turkish Volleyball Federation, Mr. Özkan Mutlugil, and CEV Vice President Banu Can Schürmann.