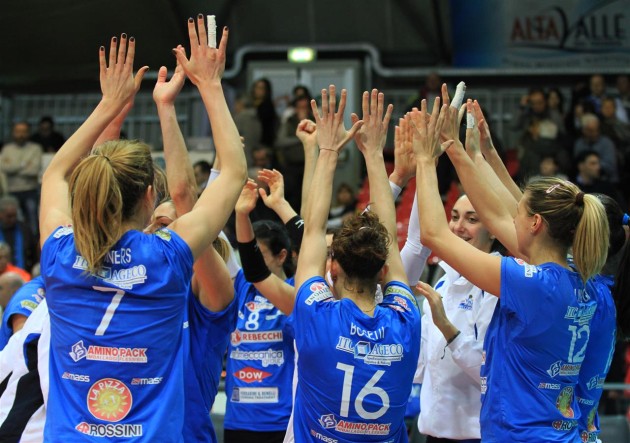 “Our opponents did try many substitutions as they wanted to change the course of the game but my players were not caught by surprise and remained very focused all the way through” Caprara says. “We got the right to play a European final which is always something special but first we shall enjoy this win. I really liked the attitude my players showed from beginning up to the end and I am particularly satisfied that they kept calm and concentrated also in the third set where HAMBURG got to the front” Caprara continues. “The nicest thing is that these players are always keen to learn though some have got much experience and a long career in the sport” he stresses.

Romania’s Carmen Turlea was eventually voted MVP of the game as she scored 20 points and positively finalized 50% of her attempts in attack. Els Vandesteene and Sarah Ammerman top scored for Aurubis with 10 points apiece.

PIACENZA got off to a flying start quickly moving the score up to 9:4 in the first set; the Italians could finally break away in the score by the second technical time-out (16:9) but did not stop playing with great quality and consistency (21:10); as Aurubis scored a few points, Caprara briefly stopped the game at 23:15 and his players responded well by pocketing the opening set at 25-16.

The hosts opened the second set with the right pace but HAMBURG was able to stay tuned by showing good blocks and leveling the score at 9 all. However, that did not last long as PIACENZA scored three consecutive points (13:10) and then stretched the margin by claiming also the next two. By the score of 21:12, the fate of this set looked pre-determined and though once more Aurubis could score a few points, PIACENZA marched comfortably to the provisional 2:0 (25-16).

Aurubis set the pace of the game in the early phases of the third set but PIACENZA drew level at 4 after some great actions in defense. The guests from Germany got the slimmest possible margin by the first technical time-out and a neck-to-neck race unfolded. PIACENZA then cruised to the front (13:10) and with a couple of points scored by Turlea and Martina Guiggi, the hosts got a four-point lead at the second mandatory stop. At 19:15 for PIACENZA, Aurubis claimed three points in a row and Caprara stopped the game promptly supported by an attack killed by Turlea. Once more Aurubis cut the gap to one point but PIACENZA found back their best play to cruise to the 25-21 that sealed their 3:0 win.

“We played a good match and anyway making it to the semis in our first European Cup season is a tremendous success” reflects Aurubis HAMBURG mentor Helmut von Soosten. “Though we could not keep the pace imposed by our opponents, I think we had a couple of good matches also with PIACENZA. Before the start of the season only a few could predict we would have gone so far in the competition. We’ll now focus exclusively on the national league where we are supposed to play for the places 5-7”.

“I think that our performance in the Challenge Cup was good not only for our club, but also for the city of Hamburg and Germany’s Volleyball family. The team turned into a very good ambassador for all these parties. We definitely could achieve more than we expected. My gratitude goes to the players as well as to our main sponsor Aurubis AG, because they made all this possible” concludes club President Horst Lüders.