Baku, Azerbaijan, November 28, 2011. The winners of the 2011 FIVB Club World Champs in Doha, Qatar, this past October, Rabita BAKU, will debut this coming Thursday in the 2012 CEV Volleyball Champions League as they play France’s ASPTT MULHOUSE at “Sarhadchi Olympic Centre” in Azerbaijan’s capital city, Baku. 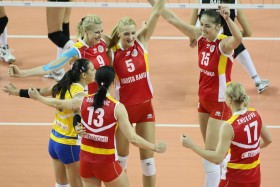 Rabita wants to delight the many home fans with a series of great performances in the prelims to safely walk through the next rounds of the competition and qualify for the final four that is set to take place next March in Baku.

The roster did not change much in comparison to last year but in addition to the players retained from the past season great stars like Natasa Osmokrovic, Mary Spicer and Dobriana Rabadzhieva have joined the team.

Rabita will be missing local star Natalya Mammadova who is recovering from a serious shoulder injury and won’t be back for the start of the season. However, the last training sessions placed under the guidance of head coach Zoran Gajic – Olympic champion back in 2000 with the then Yugoslavia – were joined by the complete group after most of the players were busy earlier this month with their respective national teams.

“We started this season very well by claiming the Club World Championship in Doha and we want to stretch our winning streak” says Serbian opposite Sanja Starovic. “Last season we settled for second in the Champions League and this time we want to go for the crown. This competition is extremely important for the club but also for the Azerbaijani community, so we want to make the local people happy with our good results. I just hope there will be many fans cheering on us” she adds.