Muszyna, Poland, November 28, 2011. Bank BPS Fakro MUSZYNA of Poland will open its campaign in the 2012 CEV Volleyball Champions League playing at home Serbia’s Crvena Zvezda BEOGRAD. These teams already tested out their likes last year in the League Round where MUSZYNA claimed both matches with the same score (3:1). 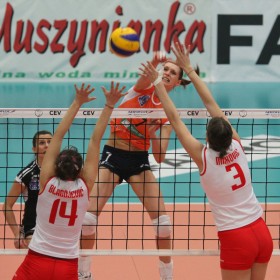 Poland’s champions are once again the pre-favorites of that clash in a group that includes also Dinamo MOSCOW of Russia and Italy’s Scavolini PESARO.

Bank BPS Fakro signed for the 2011/2012 season the former captain of Serbia national team, Vesna Djurisic, and the middle blocker admits she will play a Serbian team in the European Cups for the first time since she left Jedinstvo UZICE to move abroad.

“I have not played a Serbian team for years. I did not have such an opportunity since I moved out of Serbia some 9 years ago. This clash is very important to me but if I have to choose between the clubs from Belgrade, I still prefer Partizan to Crvena Zvezda even though my cousin Nemanja Vidic used to play for Red Star a couple of years ago. Vidic is a well known soccer player, a member of Manchester United as well as of the Serbian national team”

The organizers are expecting and hoping for a sold out crowd at the home opener of the 2012 CEV Volleyball Champions League. Bank BPS will join this game by lining up probably the same players that participated in the last three games – all won – of the national league. In addition, opposite Kinga Kasprzak is back after nursing an injury that kept her away from the court for a long time.

RC Cannes to play strong Italian side on Wednesday