RC Cannes to play strong Italian side on Wednesday

RC CANNES will play this coming Wednesday Italy’s MC-Carnaghi VILLA CORTESE for the first round of action in the 2012 CEV Volleyball Champions League. 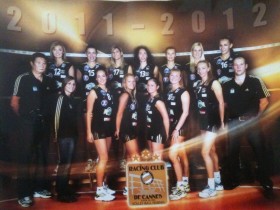 irst round of action in the 2012 CEV Volleyball Champions League, cev.lu

RC Cannes is the only club that did never miss the participation in CEV Volleyball Champions League since its introduction back eleven years ago while Villa Cortese did debut last year making it to the Playoffs 12. That Pool comprises also Eczacibasi Vitra Istanbul of Turkey and Germany’s Schrweriner SC.

Slovenia’s Tina Samec Lipicer recently joined RC Cannes after playing last year in the Czech Republic for VK Modranska Prostejov to compensate for the injury that has affected Amadea Durakovic.

The ambition of RC Cannes is to make it to the final four scheduled for next March in Baku as per the words of club President Anny Courtade.

On the other side of the net, the Italian national volleyball team have changed five out of six starting players in comparison with last year but are motivated to do well.