Sopot, Poland, January 31, 2011. Poland’s largest and most modern sports hall, the “Ergo Arena”, will be most probably sold-out as the home side of Atom Trefl SOPOT plays on Wednesday the 2011 club world champions of Rabita BAKU for the 1/8 finals of the 2012 CEV Volleyball Champions League. 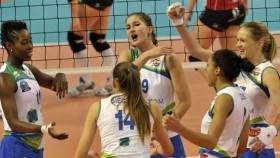 The guests – who are mentored by Zoran Gajic, the mentor of the Yugoslav national team that got Olympic glory back in 2000 in Sydney – have arrived to Gdansk already on Monday having a first training session on that same evening.

Rabita BAKU sees the CEV Volleyball Champions League as the main goal for this season, even more since the final four was assigned to the capital city of Azerbaijan.

Last week was a busy one for Atom Trefl as the team played on Tuesday edging a team from Bydgoszcz in straight sets to qualify for the final four of the national cup that took place this past weekend in Radom.

This is actually a real disappointment for Atom Trefl even though the club was founded only two years ago.

After finishing the prelims of Europe’s most elitist competition, the roster of the team was reduced to 14 players.

Turkey’s Neriman Özsoy – the real star of the group – has indeed decided to leave the club of Atom Trefl to sign for Russia’s Dinamo KRASNODAR.

She is likely to be replaced by a young and very talented home grown player, Ewelina Sieczka, in the starting six for the match with Rabita.