Dresden, Germany, January 31, 2012. As they travel to Dresden for the 1/8 finals of the 2012 CEV Volleyball Champions League, the players of Dinamo KAZAN are “anchored” by their most popular star and team captain, Ekaterina Gamova. Even though data about her height show some discrepancy – she is officially 202 cm tall but some sources mention 205 – she certainly remains one of the tallest Volleyball players out there. 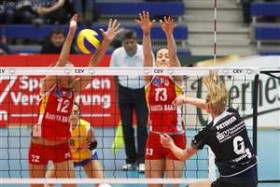 “Even though she is that tall, she shows incredible coordination and she is hence able to attack from an incredible height” says DRESDNER SC head coach Alexander Waibl.

“She is a superstar and an exceptional athlete” he adds.

“Ekaterina is a true Volleyball personality and she has been playing with the same quality since 1999. This is not something that anyone can achieve” had singled out Vladimir Kuzyutkin while he was at the helm of Russia’s national team that took gold at the 2010 FIVB World Championship in Japan with Gamova being voted MVP of the tournament.

Gamova hails from a household made up by women as her father left the family by the time she was still a young child.

She was raised primarily by her mother, grandmother and an aunt who used to be a Volleyball coach and introduced Katya to the sport at the tender age of 9 in her home town of Chelyabinsk.

As she was 14, Gamova joined the local club of “Metar” and thereby started earning some money by playing Volleyball.

Journalists and media speculate that she is currently receiving an annual salary that may be up to 500’000 €. J

ust to make a comparison, Dutch lady Judith Pietersen who plays for DRESDNER SC is getting 1/12 of that amount!

Gamova was transferred to one of Russia’s most decorated Volleyball clubs, Uralochka, back in 1998 and a year later she debuted with the national team.

In Ekaterinburg she met her boyfriend – now husband – and the couple spends most of their time in Moscow, where Gamova enrolled to study journalism in 2006.

Katya is definitely one of the best spikers in the international arena and has regularly received individual awards at all major competitions she has participated in with her club or with the Russian national team.

She is seen as a trademark of Russia’s Volleyball, which stands as synonym for power and athleticism. Even though her list of honors is really impressive, still some trophies and medals are missing from her personal showcase. She did never win Olympic gold, while the FIVB World Cup and the CEV Volleyball Champions League have never seen her end on top of the podium.

As she travels to Dresden for the 1/8 finals of Europe’s most elitist competition, she will be visiting Saxony for the second time, after having been in Riesa for the prelims of the 2002 World Championships.

“We have already played the best Volleyball clubs out there” recalls Waibl as DRESDNER SC was assigned to a prelim group that included the 2010 and 2011 world champions of Fenerbahce Universal ISTANBUL and Rabita BAKU.

Waibl feels that Dinamo KAZAN is a little weaker than the previously mentioned teams but even though the players from Tatarstan did lose the final of the national cup to Dinamo MOSCOW, they still remain the clear-cut favorites of this clash.

“We are the absolute outsider and we are totally aware of this” he says.

Judith Pietersen will be Gamova’s counterpart as she is the main diagonal player of DRESDNER SC.

The 22-year old player who originally hails from the Netherlands was plagued by injuries at the start of the season but she has been fit since this past December and hence gradually improved the quality of their play.

Pietersen did an excellent job this past week as DRESDNER SC edged the archrivals from Schwerin in the Bundesliga and she is the top scorer of her side.

“Judith is very flexible, as she can attack from any position and in every direction, so this makes it hard for the opponent to predict her actions” says Waibl.

She is determined to show that via this campaign in the Champions League she and her team have made it to another level.