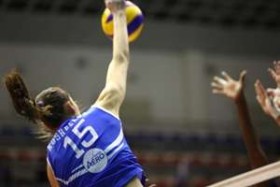 Dinamo KRASNODAR makes first step on the way to Challenge Round

Dinamo was missing Svetlana Surtseva, currently sick, and also Turkey’s Neriman Özsoy who was recently transferred to the team but is no longer eligible to play in the European Cups since she had already joined the prelims of the Champions League while representing Atom Trefl SOPOT.

Daria Zinchenko, who had started this season in Kazan, debuted this afternoon for Dinamo KRASNODAR.

The guests from Austria surprised the home heroines with a great start going up 5:8 and 6:10 before Dinamo stormed back to draw level at 10 all with the help of Zinchenko from the serving area.

Dinamo was already up by the second mandatory stop playing really focused and with a very few mistakes (16:13) while long rallies did entertain the local audience.

Although another time-out was called by head coach Valery Losev as the score stood at 22:20, Dinamo pocketed the opening set a while later with a spike of Olga Fateeva (25-20).

After the score stayed initially close, Tatyana Kosheleva contributed a mini-break for Dinamo to go up 8:5 in set 2; the gap was gradually widened (12:6, 16:8) with great blocks for Fateeva, Elena Konstantinova and Anna Gansonre.

Losev stopped briefly the game as the Austrians were trying to deliver a comeback and his words did shake the local heroines who scored the next three rallies in a row.

It was once again Olga Fateeva who did finish the job at 25-22. Once again, as in the opening set, Post SCHWECHAT started brilliantly (6:8) but Dinamo gradually got back on track (11:10, 16:13); the score stayed very tight up to the end with Dinamo eventually going for a win in straight sets.

“It was the first game for Daria Zinchenko with our team and so she was feeling a little nervous” commented Losev after the match.

“I think she will improve match by match and today she was well supported by all players and the coaching staff. I am sure that the return game in Austria won’t be an easy one”.

“I have to congratulate Dinamo because they played a good game. They changed some of their players and we were not ready to play with such a variation from the roster we had studied. I am convinced that there won’t be any more surprises for the return match in Vienna and we’ll try to go for a positive result” said the Austrian team manager Darko Antunovic.

“We knew that Dinamo is a strong team and our intention was to be able to take up this challenge. They have a great block and for the return match we will try to limit our mistakes” added head coach Irina Brandstetter.