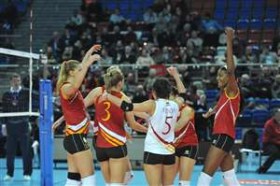 Some 300 supporters of A.E.K. ATHENS were also in attendance, having traveled to Turkey’s megalopolis from Greece, Switzerland and even from London.

The opening set provided the fans with a breath-taking final rush, as A.E.K. ATHENS was up 22:24 before Galatasaray turned the odds around to wrap it up at 26-24.

After that, the home players dominated the scene by taking set 2 and 3 quite comfortably and seal their 3:0 win.

However, this is only one step forward to the next stage of the competition as Galatasaray will have to win also the return match scheduled for next week in Greece to avoid the risk of a golden set.