Moscow, Russia, February 1, 2012. Dinamo MOSCOW easily disposed of Greece’s Iraklis THESSALONIKI in the first match scheduled for the Challenge Round of the 2012 CEV Volleyball Cup by scoring a home win in straight sets (25-17, 25-17, 25-22) with some 2’100 fans in attendance. 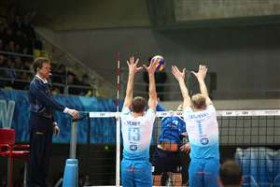 The hosts dominated the scene with their blocks and attacks while the guests of Iraklis could not really find a way to stop the triumphal march of Dinamo with the only exception being the third set.

Alexander Markin paced Dinamo with 14 points and 61% of efficiency in attack.

Waiting for the return coming up next week in Thessaloniki, Dinamo will challenge Lokomotyv KHARKIV in the next round of the Russian national league that this year was opened also to teams from Ukraine and Belarus.

This is a remake from the 1/16 finals of the CEV Cup where Dinamo scored two wins to continue its European campaign.