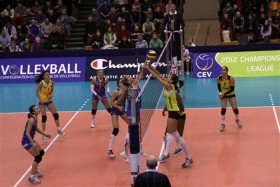 The host team quite surprisingly claimed the opening set and, for a long time, the home heroines could even hope to go for a sensational victory; however, the pre-favorite Turkish team gradually stepped up and eventually pocketed the game (1:3; 25-23, 23-25, 17-25, 16-25).

The Czech fans, nevertheless, remunerated “their ladies” with a long standing ovation, since the team, especially in the first two sets, had performed at their very best.

Thanks to that great effort the hosts seized the first set and in the second one they were not far from making it a miracle.

Their rivals, however, started to play better and after a very close finish of the second act, the rest of the game was under their control.

“It was a very good match, and a very tough one for us with many good rallies. VK Modranska proved to be a very strong rival, and we had to work quite hard to win. I feel really tired” US-American Logan Tom, one of many stars included in the roster of Fenerbahce, singled out.

“There is nothing to be ashamed of. We played an excellent match and our performance was just great, especially in the first two sets. Thanks to our perfect defense we managed to resist to the high-quality attack of our guests for quite a long time; however, from the third set on, Fenerbahce overwhelming power started to pressure us. In spite of that we do not have to be disappointed” VK Modranska captain, Solange Soares, said at the end of the game.

“I am happy for the victory in this extremely difficult match. The excellent service of the hosts caused us substantial problems but the quality of our play gradually improved throughout the game, also thanks to the return of Lioubov Shashkova who was back after she had to nurse an injury. Her experience helped us, among other factors, to win” Zé Roberto, the head coach of the 2010 club world champions, summed up.

“We have played our best Volleyball for this season against a very strong rival. Thanks to that, we managed to keep an even score during the first half of the match, and the audience watched a number of excellent rallies with perfect defense on both sides of the net. The decisive factor in the end was that Fenerbahce scored the most important points, where they showed their great quality. They have many top international players and their block was just outstanding” concluded home coach Miroslav Cada.