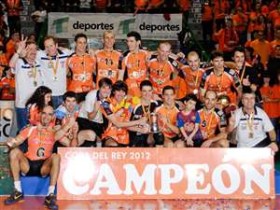 Even though the final score sounds pretty clear, still all sections of the game were hard-fought and the teams exchanged the lead several times.

CAI TERUEL got up by 2 points at 24:22 after a block scored by Jose Manuel Sugrañes who eventually added also the next rally to the count of his side to end the opening set.

CMA SORIA, a team mentored by legendary middle blocker Jose Luis Molto, played with great intensity in set 2 with the addition of Manuel Salvador but CAI TERUEL got back control of the operations well supported by Fran Rodriguez and Mark Webber, thereby going for the 2:0.

Daniel Rocamora paced CMA SORIA in the third set but as it had been the case in the previous sections of that final, CAI TERUEL stormed back loudly cheered by the local audience.

A block of Mark Dreyer sealed the 3:0 and fired up the celebrations of the home fans for that second title in a row in the competition.