Baia Mare, Romania, January 31, 2012. Remat ZALAU lost tonight its home match with Italy’s Acqua Paradiso MONZA for the Challenge Round of the 2012 CEV Volleyball Cup after a battle that lasted for four sets (24-26, 25-21, 18-25, 23-25). In front of a very enthusiastic crowd, the players of Remat ZALAU were determined to win but they were stopped by the Italian dominance. 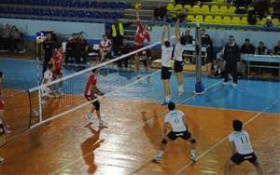 The whole first set was leaded by the guests whose player Nikolaos Roumeliotis had some fabulous attacks and together with Simone Buti blocked successfully Remat’s spikers.

In the last section of the opening set Remat tried to come back but the home guys eventually lost by a margin of two (24-26).

In set 2 Remat ZALAU managed to dictate the pace of the game up to the second technical time-out.

Peter Nagy and Zoltan Mozer delighted the home audience with some powerful attacks and they wrapped it up at 25-21.

Even though the Romanians were pretty close to achieve their goal to score a home win, their concentration was suddenly gone and they lost the final two sets unexpectedly.

The last set was quite balanced, both teams putting a passionate effort to lead the game.

Remat ZALAU’s team captain, Zoltan Mozer, was disappointed with the result, saying that: “We did our best to play well, but in the first set our reception wasn’t very good. Then we had some problems with our service. We tried to fight, but MONZA is a very strong team, they won the most important points as they stayed always fully concentrated”.

Mariusz Sordyl, the head coach of Remat ZALAU stated: “We played well three sets, but in the last one we lost a few important points, which decided the winner. I want to thank Remat’s players for the fact that they fought for every single point. We will try to win the return match in Italy”.

Mauro Gavotto, Acqua Paradiso MONZA captain, added: “It was hard to play in Baia Mare, due to the fact that the audience was very enthusiastic, the climate is different and we traveled many hours to make it to Romania. What is important is that we won today and we go back to Monza with this great win. Remat is a good team, with talented opposites and setters”.

The head coach of MONZA, Emanuele Zanini, said: “Remat ZALAU has great players, which made our mission harder. It wasn’t our best day because I believe that some points were questionable. Small details made the difference in the end”.