After finishing the prelims with an immaculate record, France’s RC CANNES extended tonight its winning streak by downing Bank BPS Fakro MUSZYNA in straight sets (25-19, 25-18, 25-19) for the first round of the 1/8 finals in the 2012 CEV Volleyball Champions League. 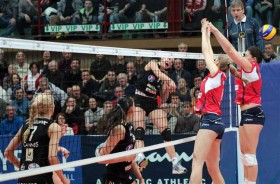 The match started with some delay as electricity had briefly gone there in southern Poland, but the guests from France did not waste much time to impose their dominance, going immediately up 5:0 and forcing home mentor Bogdan Serwinski into an early time-out. Bank BPS Fakro got back on track but still could not stop the run of RC CANNES (25-19).

The team from the French Riviera dominated the scene also in set 2 with Anja Spasojevic registering an impressive 70% of efficiency in attack. Bank BPS Fakro MUSZYNA got up in the score in the opening of set 3 (3:2) and the figures stayed tight up to the second technical time-out before RC CANNES and Victoria Ravva accelerated the pace to finish it off in straight sets.

“Our attack tonight was kind of archaic in comparison to the great combinations showed by our opponents. This team is even better than I thought it to be and I assume they can go for a great result at the end of the competition” said Serwinski. “It is never easy to play in Poland; this is my fourth time in this country and I know that the fans can always create a great atmosphere for the home team that the guests cannot always stand. However, we played as we had planned, both technically and tactically. That is why we won in straight sets tonight” stressed RC CANNES head coach Yan Fang.

CEV CL: Vakifbank takes first round of derby with Eczacibasi