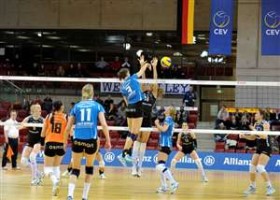 The home side dictated the pace of the game for most of the opening set and they looked really confident especially as they were able to close some long rallies in their favor. As his side was trailing 18:22, Italian head coach Francois Salvagni asked for a time-out and his players eventually turned things around, scoring 7 consecutive points to take it home 22-25 after 30 minutes of play.

STUTTGART looked totally different in set 2 having problems in coordinating the actions of the single players and being unable to keep the quick pace set by their guests. URBINO stood out in defense and German mentor Jan Lindenmaier brought in Doreen Engel to try to stop that negative trend for his side. STUTTGART reduced the gap but the Italians were finally able to go up 0:2. The score stayed extremely tight in set 3 with none of the teams being able to get a margin of more than 2 points. However, URBINO broke that balance right before the final rush and eventually they finished it off with a real missile from the middle of the net.

“Of course we had expected a tough game but the first set let us see that we had our chances, so I am a little disappointed” said home coach Jan Lindenmaier after the game.