Volley BERGAMO downed the archrivals of Scavolini PESARO in straight sets (25-16, 25-20, 25-22) for the 1/8 finals of the 2012 CEV Volleyball Champions League with some 1’000 fans in attendance on Thursday at Pala Facchetti in Treviglio. 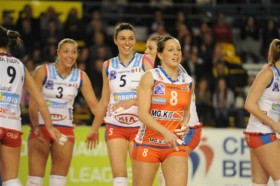 Volley BERGAMO caught a flying start setting the pace all the way through in the opening set (8:4, 16:12 and 21:15), going straight up to the end without losing composure. The second set was much tighter with a neck-to-neck race that paved the way for an exciting final rush. BERGAMO opened the gap pretty quickly in the third set (8:2) and eventually sped up to score a speedy 25-22 for a 3:0 home victory.

“This is a very important victory” commented head coach Davide Mazzanti. “It was very important to take this match tonight and we are happy with the result. We had a good start with the spikes of Quaranta, but also Arrighetti and Nucu registered good efficiency in attack. I hope we will play like this also next week in Pesaro”.
MVP of the match was Annamaria Quaranta, best scorer with 16 points (67% of efficiency in attack) including 2 blocks and 2 aces.

CEV CL: Lokomotiv to host leader of Bundesliga after away win in Bavaria

CEV CL: Everything is ready in Macerata...