CEV CL: Lokomotiv to host leader of Bundesliga after away win in Bavaria

Novosibirsk, Russia, February 3, 2012. After scoring a 3:2 away win this past Wednesday in Bavaria, Russia’s Lokomotiv NOVOSIBIRSK will play again Generali UNTERHACHING – the current leader of the Bundesliga – in a few days for the return match of the Playoffs 12 in the 2012 CEV Volleyball Champions League. 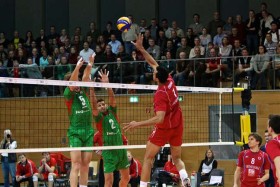 Coming back from Germany, Lokomotiv traveled directly to Kemerovo to play there Kuzbass for the thirteenth round of action in the national league scheduled for Saturday, February 6. If you take into account the many travels that teams competing in the Superleague have to undergo, this time Lokomotiv had some luck because Kemerovo is located only some 250 km from Novosibirsk.

Generali is well-known for its international roster which includes Slovakia’s setter Branislav Skladany and outside hitter Robert Hupka, team captain Max Günthör and opposite – so far also Generali’s best scorer – Christian Dünnes, middle blockers Fredy Cedeno (Venezuela) and Thiago Oliveira Carvalho (Brazil). Denis Kaliberda, who was born in Ukraine, is another excellent outside hitter and he is considered one of the rising stars in Germany’s Volleyball arena.

“I think that we are in a very good position for the return game in Novosibirsk” said Lokomotiv head coach Andrei Voronkov after the first match of the Playoffs 12 played in the outskirts of Munich.

“We shouldn’t forget that our opponents will have to travel for ten hours and cross several time zones; moreover there will be -30 degrees Celsius in Novosibirsk”, he added.

“At this stage every single match is important for us and our goal is to make it through the Playoffs 12” stresses US-American middle blocker Ryan Millar.

“Even though this is the first participation in the Champions League for Lokomotiv NOVOSIBIRSK, we are confident enough to go for a good result” he concludes.