CEV CL: Vakifbank takes first round of derby with Eczacibasi

Eczacibasi VitrA and Vakifbank TTelekom ISTANBUL extended their long rivalry by playing tonight the first match for the 1/8 finals of the 2012 CEV Volleyball Champions League, with last year’s champions eventually taking home the win with the score of 3:1 (25-22, 25-21, 20-25, 25-20) 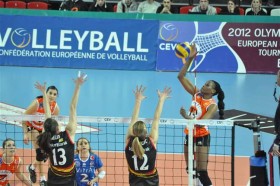 Vakifbank takes first round of derby with Eczacibasi

Vakifbank started the game with a great pace (8:2, 16:13) but Eczacibasi gradually fought back to draw level at 22 all. Serbian star Jelena Nikolic paced Vakifbank in the deciding final rush and her side could eventually pocket the opening set at 25-22.
With their opponents setting the tempo also in set 2, Eczacibasi head coach Lorenzo Micelli was forced into an early time-out as his girls were trailing 2:4. Vakifbank TTelekom was up by both mandatory stops (8:5, 16:12) before Micelli opted for a double substitution, with Esra Gümüs and Senna Usic replacing Busra Cansu and Dragana Marinkovic. As Eczacibasi improved its block and defense system and with some excellent attacks of Neslihan Darnel, they eventually cut the gap to -1 but Vakifbank changed gear once again and could go for the provisional 2:0 (25-21).

Vakifbank opened set 3 with a massive 7:2 before Eczacibasi got back on track via Darnel (7:7). After trailing 10:13, the players mentored by Micelli leveled at 14 and finally displayed their best play with Darnel, Mirka Francia and Maja Poljak on fire, going eventually up in the score (19:16). Even though the head coach of Vakifbank, Giovanni Guidetti, tried out some changes, he could not stop the run of Eczacibasi that eventually sealed it at 25-20.

Both teams played with great determination in set 4 with Vakifbank setting the pace at the first technical time-out (8:6). Neslihan Darnel anchored once again Eczacibasi VitrA by contributing a provisional 13:12 lead, before the score was turned around only a few minutes later. Micelli tried to get rid of the problems his players were showing but rather unsuccessfully as Vakifbank wrapped it up at 25-20 for the final 3:1.

Malgorzata Glinka and Jelena Nikolic paced Vakifbank with 23 and 15 points respectively while Neslihan Darnel finished atop of the lists for Eczacibasi with 22.

“Vakifbank played really well tonight and they deserved to win. However, with the golden set rule, we still have our chances to make it to the 1/4 finals by taking the next game. We will be working hard up to there to get the right momentum” stated Micelli after the match.

“I am very happy because the team displayed some good Volleyball, especially in blocking. Our spirit was good as well but we are just in the middle of nowhere. We do not celebrate that much yet because we still have to win also next week” singled out Giovanni Guidetti, the head coach of Vakifbank.