Toronto aka the largest city in Canada will host one of the Intercontinental Rounds of the 2012 FIVB World League. The tournament will be from May18th-20th at the Ricoh Coliseum. The exact schedule will soon be confirmed. 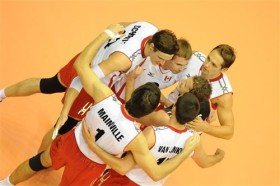 Joining the host Canada are last year’s World League silver and bronze medalists Brazil and Poland together with the underdogs Finland.

With this new format to accommodate a very busy Olympic year, gone is the home-and-away format used from the previous editions.

A total of 6 matches (2 matches per day) will entertain and captivate volleyballs fan in Canada during this round.

Canada, who last competed at the World League in 2007, is in a very tough pool but again anything can happen.

Gavin Schmitt, Dallas Soonias, Freddie Winters, Dustin Schneider and the rest of the Canadian squad have improved in the last year.

Therefore, we expect the team to put up a great fight against the visitors.

Only the top ranked team from the 4 Pools, the second best ranked team and the host country Bulgaria will advance to the Final Round.