After scoring a 3:0 win against Axis Shanks GUIBERTIN in the last round of the regular season, Noliko MAASEIK pocketed the top position in the standings of the national league getting hence ready and pretty confident for the return game with TRENTINO PlanetWin365 in the Playoffs 12 of the 2012 CEV Volleyball Champions League. 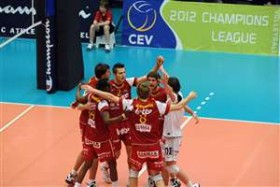 After losing 0:3 at home to the triple European and World champions, Noliko has got to go for a kind of “mission impossible” this Wednesday in Trento.

The next stop for Noliko will be the final of the national cup scheduled for Sunday, February 12, where MAASEIK will be going for its fourteenth crown in history by playing Euphony ASSE-LENNIK at “Lotto Arena” in Antwerp. The Playoffs of the national league will be also starting soon, with an away match with Knack ROESELARE scheduled for February 15 followed three days later by another game with Euphony, this time at home.