A week ago Zenit KAZAN and Stade Poitevin POITIERS delivered a great show in France for a match that eventually ended in a 3:2 away win for the guys from Tatarstan. This result has brought some additional appeal to the return match which is set to take place on Wednesday in Russia, with a spot in the Playoffs 6 of Europe’s most elitist competition at stake there. 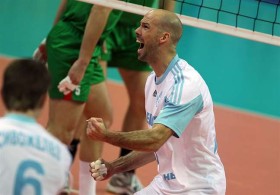 Zenit KAZAN is still experiencing some problems, with middle blocker Alexander Volkov and second setter Alexey Babeshin being both injured. Ivan Demakov, who is only 19-year old and debuted in the European Cups last week in Poitiers, will replace Volkov in Kazan too.
Last weekend Zenit suffered its first defeat this season in the national league, thereby ending a winning streak of 12 consecutive matches. Head coach Vladimir Alekno had decided to rest some of his best players to save energy for the game with POITIERS and the reserves eventually lost in straight sets to Lokomotiv-Izumrud EKATERINBURG. Zenit is nevertheless still on top of the standings in the national league and is likely to maintain that position also by the end of the regular season. Stade Poitevin also lost its last game in the national league to MONTPELLIER Volley but is nonetheless ranked first tied with TOURS VB.
“We did not play good at all in France” says Alekno, “and especially the performance of our setter Valerio Vermiglio was disappointing. He even received a yellow card and I had to confront him quite seriously. I am sure he will avoid these mistakes in the return match. As for our rivals, in France they showed good technique and a phenomenal defense; we will try to find a way to contain their strengths”.