After losing its first match in domestic competitions this season Generali UNTERHACHING looks very much like David meeting Goliath when they go into their return game for the Playoffs 12 of the 2012 CEV Volleyball Champions League against Lokomotiv NOVOSIBIRSK. 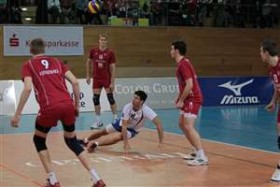 After a long trip to Siberia’s largest city Generali UNTERHACHING needs nothing short of a miracle to advance to the Playoffs 6. They have to win the match there and force an instantly played golden set, but they also have to do so without three of their best players: due to sickness libero Sebastian Prüsener as well as spikers Christian Dünnes and Denis Kaliberda  were ordered to stay at home by coach Mihai Paduretu when the team took off to NOVOSIBIRSK on Monday.
“We don’t improve their health if we fly them around the world”, Paduretu explains his decision to leave three of his starters behind. “Our focus has to be on the league and the cup final as well. That’s when the guys have to be fit again. The Champions League right now is not our main competition, though it is enormously important to gather experience”, the coach added. He also stated: “Without any experience from matches against top teams you won’t be able to win the national championship”. Prüsener, Dünnes and Kaliberda were already nursing a cold when they started the game against BERLIN on Sunday, the first chance for Generali to secure the number-one spot for the Playoffs of the Bundesliga.