As they play RC CANNES tonight at Palais des Victoires, the players of Bank BPS Fakro MUSZYNA will try to redeem their home defeat in straight sets and go for the golden set to ultimately advance to the 1/4 finals of the 2012 CEV Volleyball Champions League. 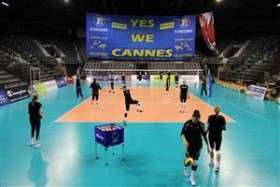 The team from the tiny village located in southern Poland traveled to the French Riviera on Monday with a private jet taking off from the airport of Poprad in Slovakia, having a first training session there in Cannes only a few hours after their arrival (see picture).   “We know that our task is a kind of mission impossible but we shall give it a try” says head coach Bogdan Serwinski. “I have to admit that our main goal for this season is to retain the title in the national league but a good result in the Champions League remains a priority too” he adds.
Last week it was Australian Rachel Rourke who tried to stop the storm of RC CANNES. “We shall actually take some rest after the real marathon we have been going through since the start of the year. However, I still think we can fight for being promoted to the next round. Of course RC CANNES played really good last week in Poland and they even surprised us by playing better than we expected them to do” she stresses.
Bank BPS Fakro still has sweet memories from last year as the team eventually qualified for the Playoffs 6 after losing the home match to MC-Carnaghi VILLA CORTESE, before taking the return in Italy as well as the golden set that followed.